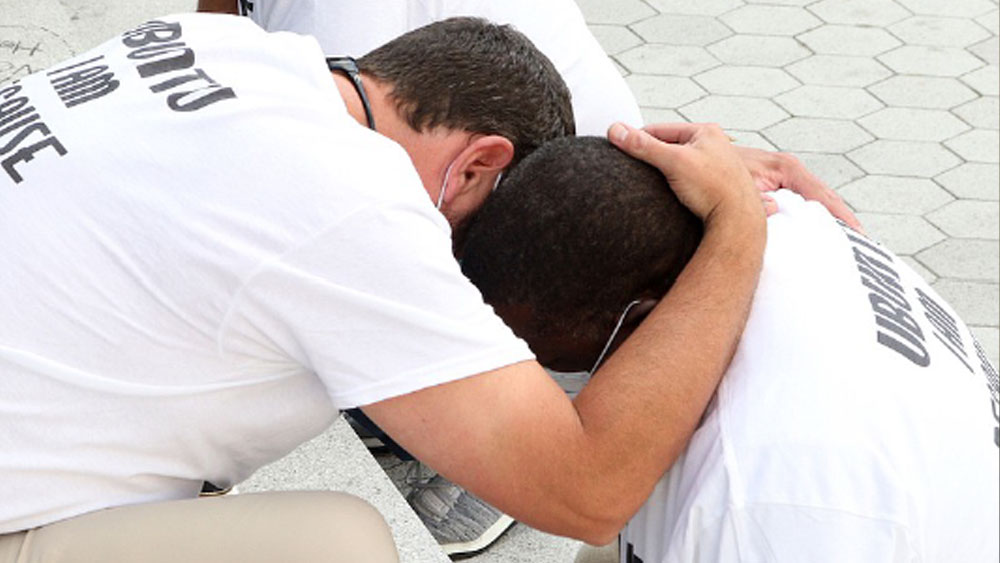 With around 200 people gathered on the Miller Park lawn Tuesday night, a group of more than a dozen local pastors called on white Americans to recognize their silence and complicity in racism throughout the nation’s history.

The black and white clergy, representing denominations across the Chattanooga region, asked people to unite in understanding and to push against ongoing racial oppression in religion, education, economics and politics.

For white Americans, talking about race and addressing racism is a nuisance to be put aside for another time, said Troy Brand, senior pastor of Orchard Park Seventh-day Adventist Church. For black Americans, it is a constant and depressing weight, he said.

“Tonight, what we’ve gathered here to do is to put an end to the frustration and the irritation. The frustration for the one and irritation for the other. We have come here tonight to have a truth and reconciliation ceremony.”
White pastors spoke of the history of racism in America, including historical examples of racism and current events of police brutality. Behind them were pictures of lynchings, slave bills and the open caskets of Emmett Till, Sandra Bland and George Floyd.

“Black people, we take everything collective,” Brand said. “When George Floyd was killed, it wasn’t just his family that mourned and was hurt. The whole black community around the world was hurt. And every single time we see somebody killed and every time we don’t get justice, it’s a collective mourning that we have. And now what we need is, we need white America – and especially white evangelical America – to take the collective stance that we have sinned.”

Along with the pictures, those gathering paused in silence for 8 minutes and 46 seconds – the amount of time Floyd lay dying under the knee of a Minneapolis police of cer – so people could see and think about racism, said the Rev. Dr. William Terry Ladd III, pastor of First Baptist Church.

Stretch that uncomfortable moment of silence for 400 years. That is racism, Ladd said.

Kingdom Partners, an organization focusing on bridging racial divides among Chattanooga’s churches, helped organize the event based on the work of the Truth and Reconciliation Commission in South Africa that documented the effects of Apartheid. The pastors involved have been working to build relationships across churches for years, said Oliver Richmond, president of Kingdom Partners.

While the group is asking for people to repent and address the sin of racism, Kingdom Partners has been criticized for not more openly supporting the demands of protesters who have gathered in Chattanooga’s streets nearly every day for three weeks. Members of Kingdom Partners said the Tuesday event was to focus on the spiritual root of racism and support everyone’s right to protest.

The Rev. Charlotte Williams, pastor of Eastdale Village Community United Methodist Church, called on those gathered to lean on the strength of the cross while the nation continues mourning and pushing for reform.

“We have to shout ‘Black Lives Matter.’ Oh, Lord, in this scared time, in order for us to say black and alive at the same time, we have to scream to the top of our lungs, ‘I can’t breathe,'” Williams said.

The clergy noted their ongoing relationships at the close of the ceremony when they washed each other’s feet, a symbol of humility and cleansing in the Christian faith.

As they knelt in front of one another with bowls of water, they wanted the people gathered on the lawn to know the act was not simply a photo opportunity, but a sign of an ongoing commitment to ght racism.