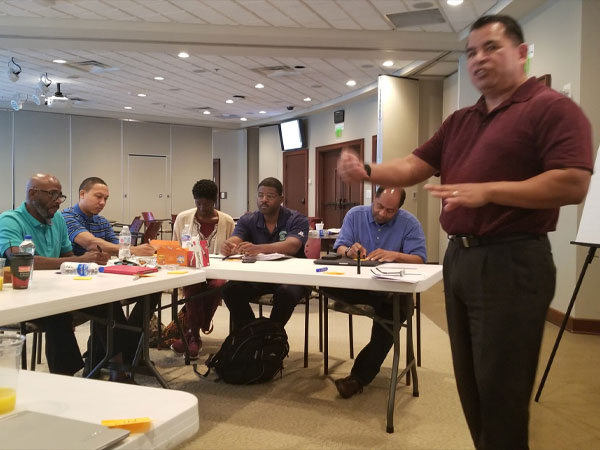 Grace Pointe Church Pastor Marcellus Barnes wanted to minister to people who lived in the Woodlawn Apartments, but his church had a limited budget. So they hosted cookouts and concerts and ministered to as many people as they could with the resources they had.

Then Calvary Church heard about Grace Pointe’s efforts and asked to help. Calvary didn’t take over the project, but sent volunteers and money to expand it.

Oliver Richmond wants to see more of that. He’s now spearheading a partnership among 12 churches and seven nonprofit organizations that have mapped out ways to share resources to help other ministries.

They call themselves Kingdom Partners. They hosted a breakfast this morning to explain their mission.

“We’re all a part of the same kingdom as churches once we’re believers, so some churches have resources that they can share with churches that don’t have resources,” says Richmond, Kingdom Partners president. “The goal is to equip the church to get outside of its walls and transform the community.”

“I was thinking about the tired single mom, the fatherless, the drug addicts,” he says. “God has given the church the authority and power to change communities.”

Kingdom Partners is open to all congregations, but they will limit participation to 20 churches this first year to make sure they have the capacity to meet needs.

The only requirement is shared values. Richmond says Kingdom Partners is focused on human transformation that results in sustainable solutions that can be replicated in other communities. It wants to work with churches, individuals and faith-based organizations to share the hope that Christians have in Jesus Christ.

The applicant must also make a donation to KP, but there is no set fee. No matter what a church gives, Kingdom Partners will work with it, Richmond says.

Dr. Joe Martin, founder of the male mentoring network Real Men Connect, was to explain at breakfast how churches can work together to effectively reach those who don’t attend church. Martin is based in Chattanooga, but has a podcast that airs throughout the country.

“We’re better together,” says Martin. “That’s how I summarize what Kingdom Partners is all about.”

If a church wants to get a ministry started, it could figure out how to do it on its own, but how long would that take, he says.

With the collective group of churches and nonprofits in Kingdom Partners, maybe someone could show the church how to get grants or volunteers willing to support their effort.

“We’re here to serve the community by serving those who want to serve and make a difference in our community,” Martin says.

“It’s going to be tough work. Pastors have to be open to allow organizations like this to assist, but it can work, especially with with someone like Richmond. He’s a Christian brother, but he also has experience in finance and overseeing a ministry at various levels,” he says.

Adds Martin, “Just imagine if everybody worked together for the same end.”